1. Give the past participle of the following verbs.

a) standard verbs: to open, to shave, to join, to ask, to watch, to work, to look, to translate, to paint, to adopt, to answer, to prepare, to order, to publish, to finish;

2. Read these sentences and translate them into Russian. Pag attention to the use of the Present Perfect Tense.

1. Mary has just gone out for a walk. 2. Have you prepared breakfast yet? 3. “Has your elder sister ever taught at school?” “No, she hasn’t.” 4. My elder brother has never had any trouble with mathematics. He likes it very much. 5. “Have they come back from Washington yet?” “No, they haven’t. They’re coming tomorrow.” 6. My mother has been sick this month. Now she’s better. 7. Jane has had a lot of things to do lately. 8. Miss Finch has been adviser to the school history club since she came to teach at our school. 9. We have known the Carlsons since 1975, for ten years now. 10. I haven’t seen Sally Blake since I left school. 11. “How long have you worked in the language laboratory?” “For three years.” 12. I joined the school mathematics club when I was in eighth grade and I’ve been a member ? ever since. 13. She’s already learned the new words. 14. It has been very cold this month. 15. I have been a student for two years now. 16. “Since when have you had that car, Jill?” “Since 1978.”

3. Roleplaying: make the necessary substitutions and act out these dialogs.

3. A: Nick has just come back from Moscow.


B: Oh, has he? How did he like it? I was there last year and I enjoyed my stay there very much.
A: He liked it very much, too.

4. Respond to these requests according to the models.

a) Would you close the window, please? I’ve just closed it.

1. Would you wake up Ann, please? 2. Would you read this text, please? 3. Would you do the sums, please? 4. Would you invite Mary to your birthday party, please? 5. Would you help John w ith his homework, please?

b) Is Jane going to have lunch now? She’s already had it.

1. Is Peter going to take a trip to the village of Florida? 2. Is Tess going to talk to Jill about it? 3. Are they going to join the French class?

4. Is Nick going to listen to the latest news?

c). I bought Hemingway’s “The Old Man and the Sea” last Friday. I’ve bought it too.

1. I looked through the papers this morning. 2. I ordered dinner ten minutes ago. 3. I asked Peter to help us yesterday. 4. I advised him to see the doctor last Monday. 5. I reread Tolstoy’s] “War and Peace” last month.

5. Respond to, these statements according to the models.

b) They’re going to see a new movie tonight. Haven’t they seen it yet?

6. Respond to these questions according to the models. Pay attention to the Present Perfect and the Past Indefinite Tenses.

b) You’ve seen Mary’s new picture, haven’t you? (last Tuesday) Yes, I have. I saw it last Tuesday.

7. Open the brackets and put the verbs' in the Present Perfect and Past Indefinite Tenses.

9. Read these sentences and translate them into Russian. Pay attention to the use of the Present Perfect Continuous Tense.

1. We’ve been doing sums for half an hour now. 2. Jane has been studying French for three months now. 3. Max has been trying to finish the picture for the last two weeks. 4. They’ve been talking for two hours now, 5. They’ve been playing chess since early morning. 6. “Have you been studying Spanish long?” “Since I joined the Spanish class in October.”

10. Respond to these questions according to the model.

11. Read these sentences, and translate them into Russian.

1. When did you,start studying English? 2. Do you like reading humorous stories? 3. Women started fighting for their independence3 a hundred,years ago. ,4. Have you just started studying English? 5. The old friends .enjoyed talking about their childhood. 6. Ann began studying history .last year, 7. Did you enjoy having dinner with Mike? 8. A few minutes, later they finished.translating the text.

12. Make up sentences using the table. Translate them into Russian.

“I am French teacher”. Я преподаватель французского языка.' “So аm I” Я тоже. “So is' Ann.” Анна тоже.

Mr. James Nelson is a professor in Russian literature at Georgetown University,3’ Washington, D. C. He teaches 19th century Russian literature? to undergraduate and graduate students. His wife, Jane, is a teacher of Russian at American University.3 She likes translating modern Soviet writers into English.

Last Friday night the Nelsons were about to have dinner when the telephone rang. Mrs. Nelson picked up the receiver. That was Dr. Bobrov,4 a Moscow University professor. Dr. Bobrov came to Washington at the invitation of Georgetown University. He has been teaching modern Soviet literature and conversational Russian to American students since September. Dr. Bobrov has lived in Washington for nine months. The Nelsons and Dr. Bobrov have often- gone out together.

This time Dr. Bobrov invited Mr. and Mrs. Nelson to a farewell dinner the following Friday. He is leaving for Moscow in a week. He asked the Nelsons, “Would you like to go to the movies after dinner? The Soviet film “Chekov’s one act comedies” is playing at the “Circle”. The Nelsons gladly accepted the invitation.

At dinner Dr. Bobrov and the Nelsons talked about their classes, lectures and research. Dr. Bobrov said, “I’ve visited a few universities and I ’m surprised that American students know so little about modern Soviet literature. I hope the students whom I taught are interested in it now.”

Then it was time to leave for the movie.

The film was not dubbed but there were English subtitles. The acting was excellent and the color was beautiful. Mr. and Mrs. Nelson enjoyed the film very much.

“The actors are just wonderful,” said Mrs. Nelson. “I’ve reread those stories recently and I like the actors’ interpretation.”

“So do I,” said Mr. Nelson. “Chekov is my favorite Russian writer.’ 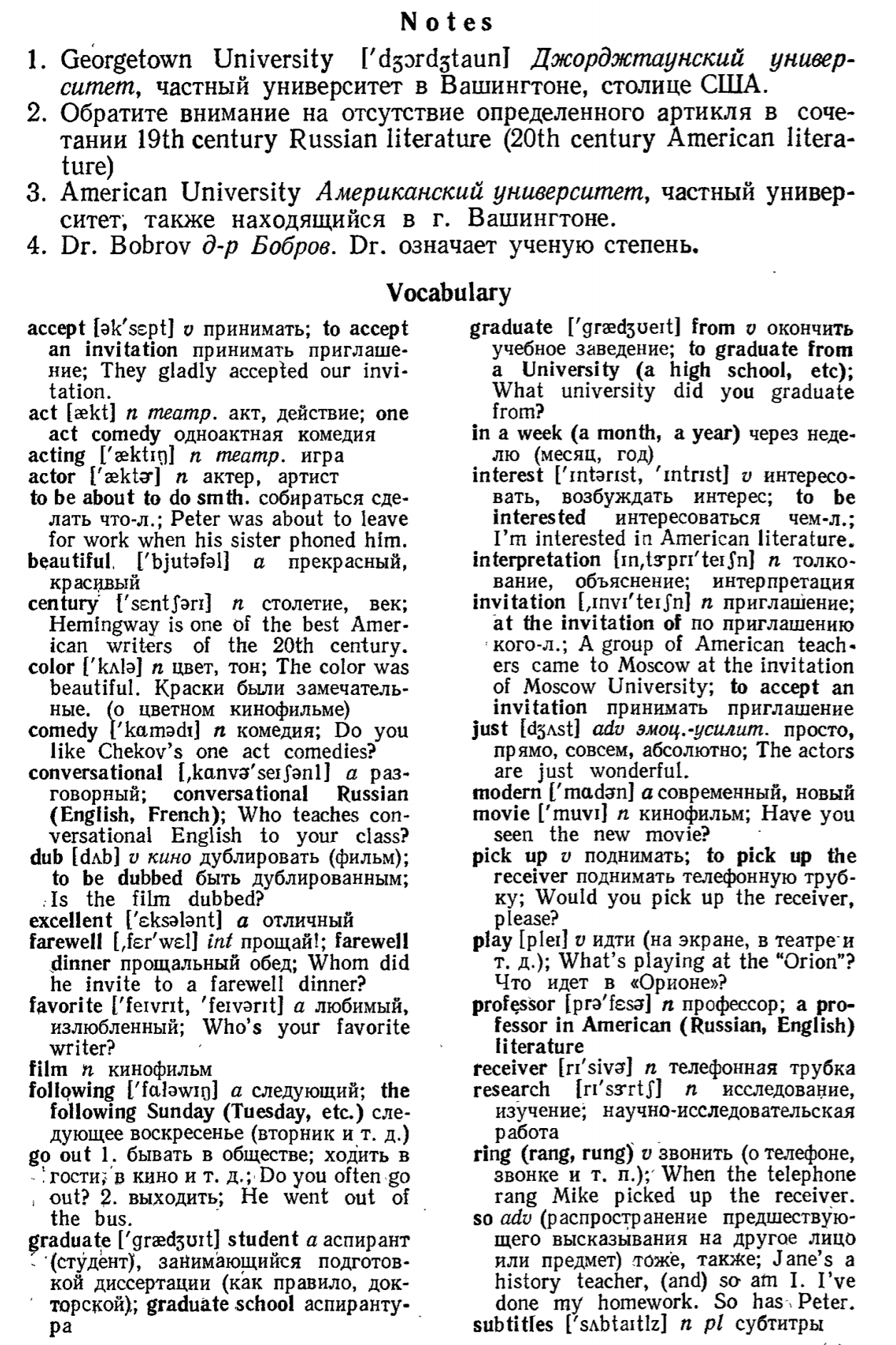 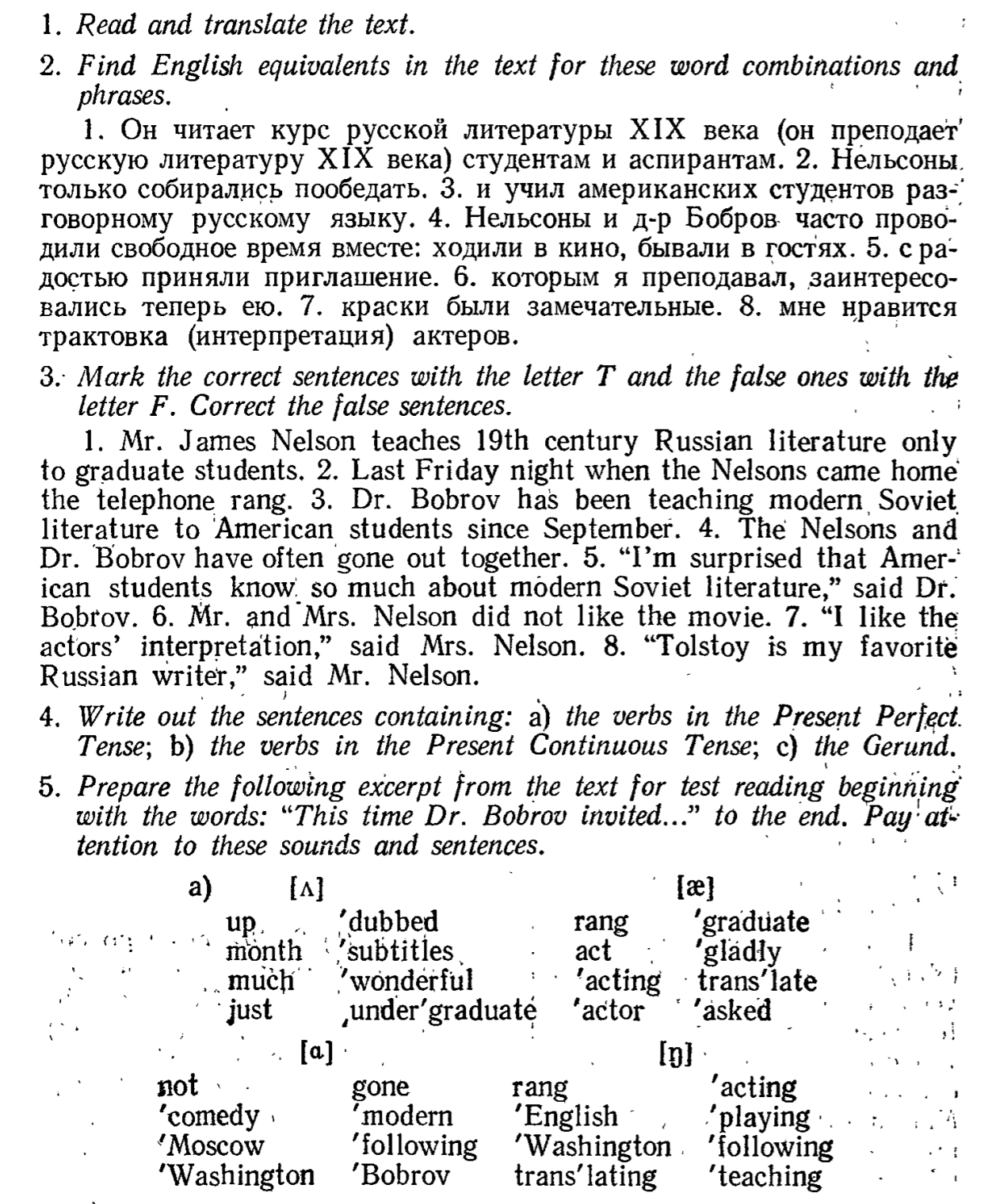 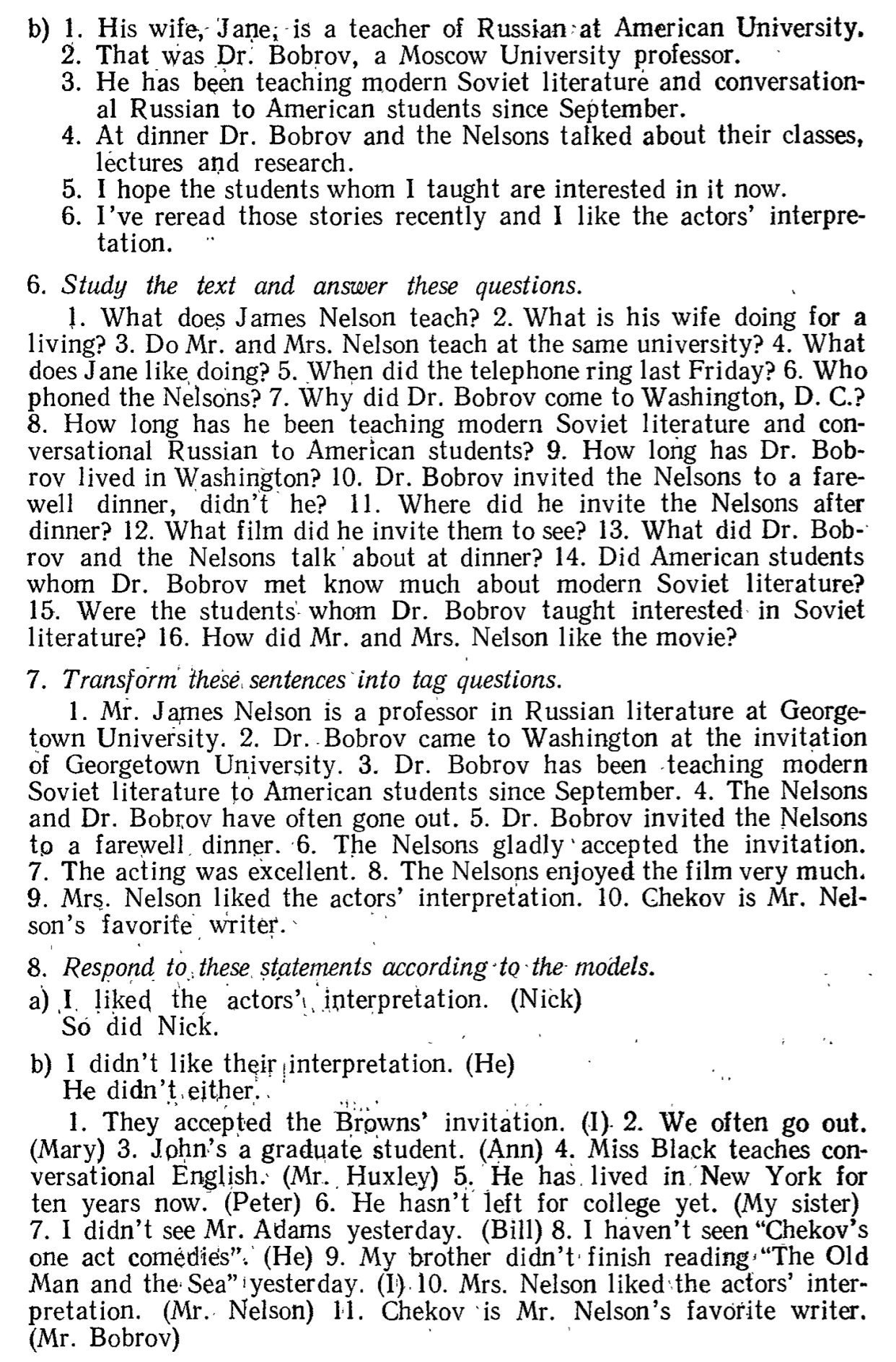 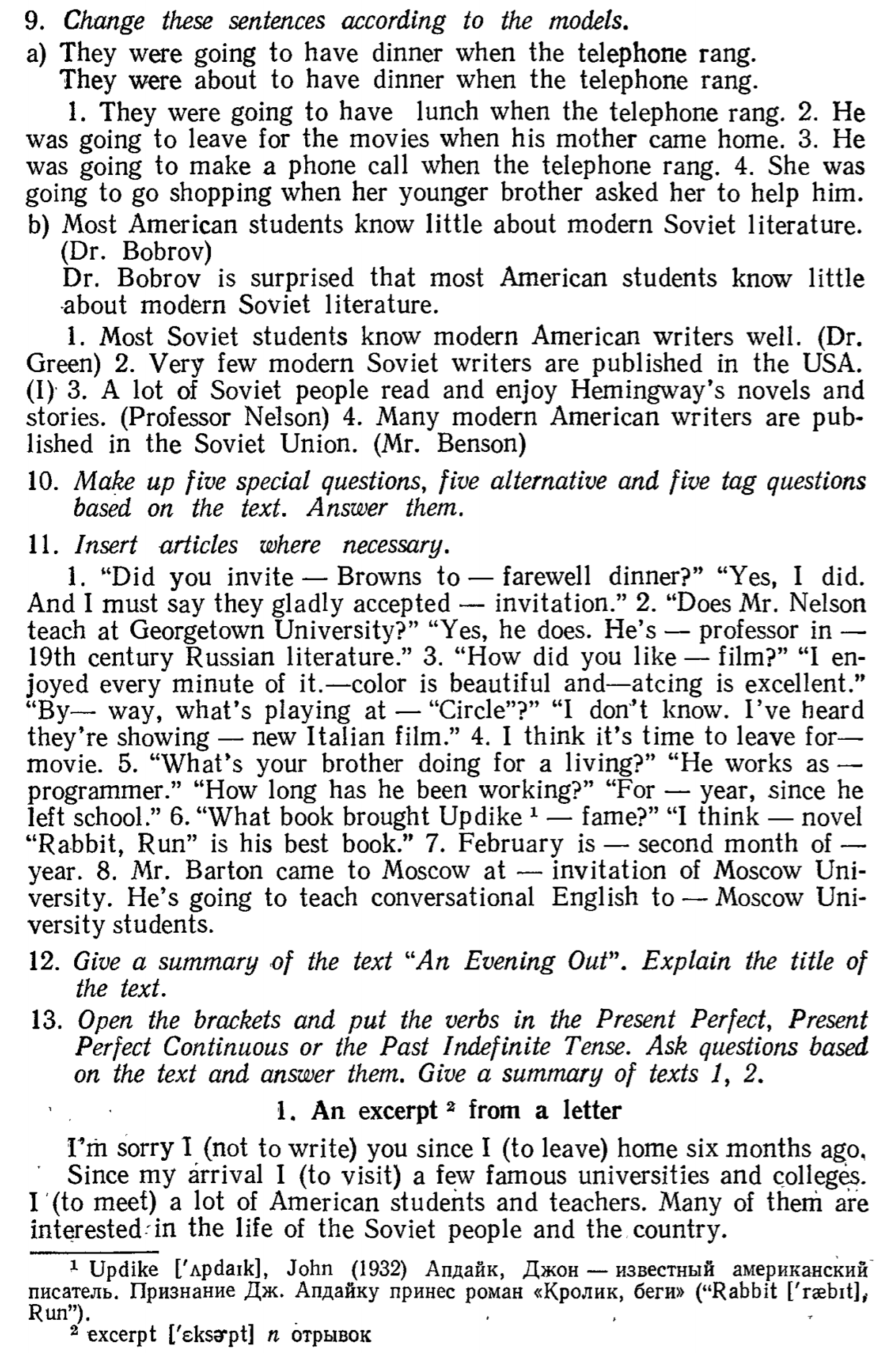